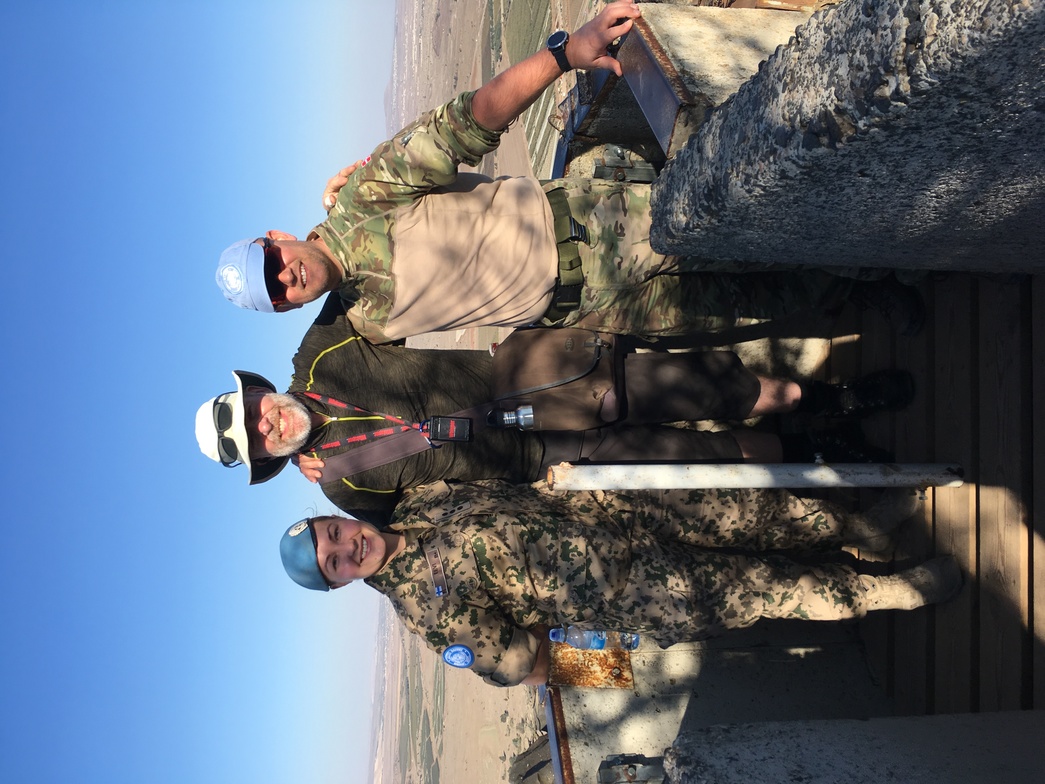 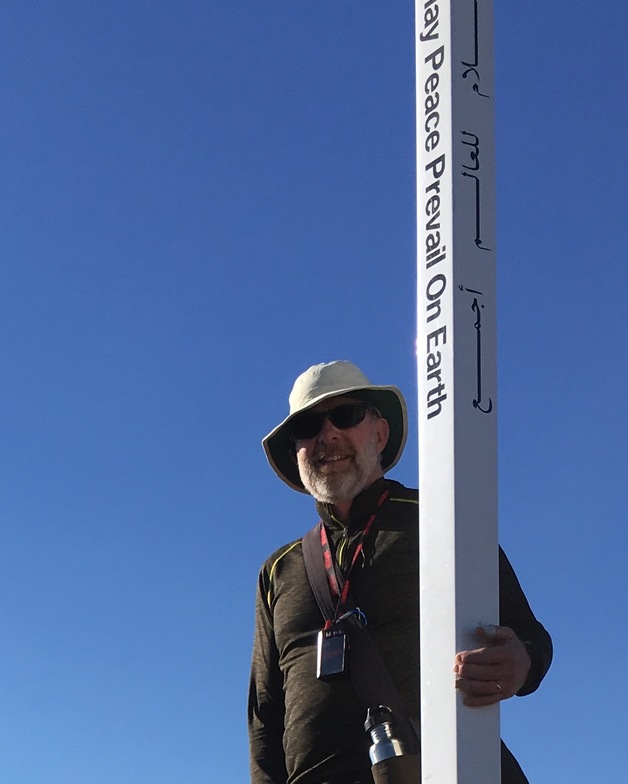 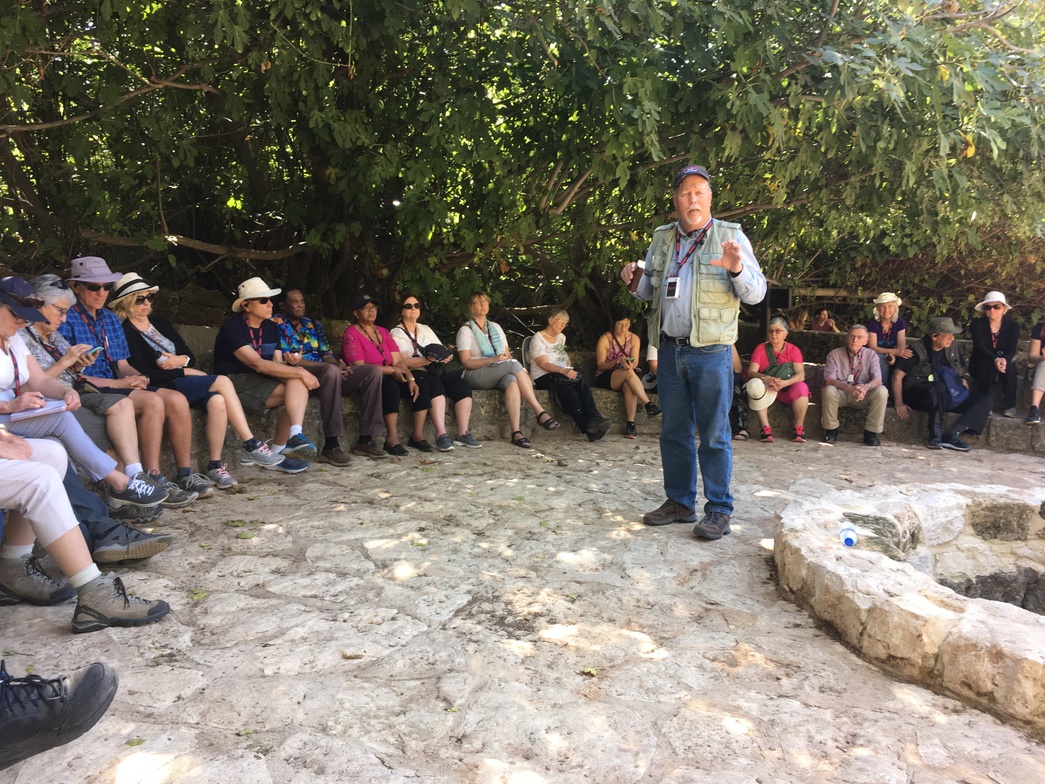 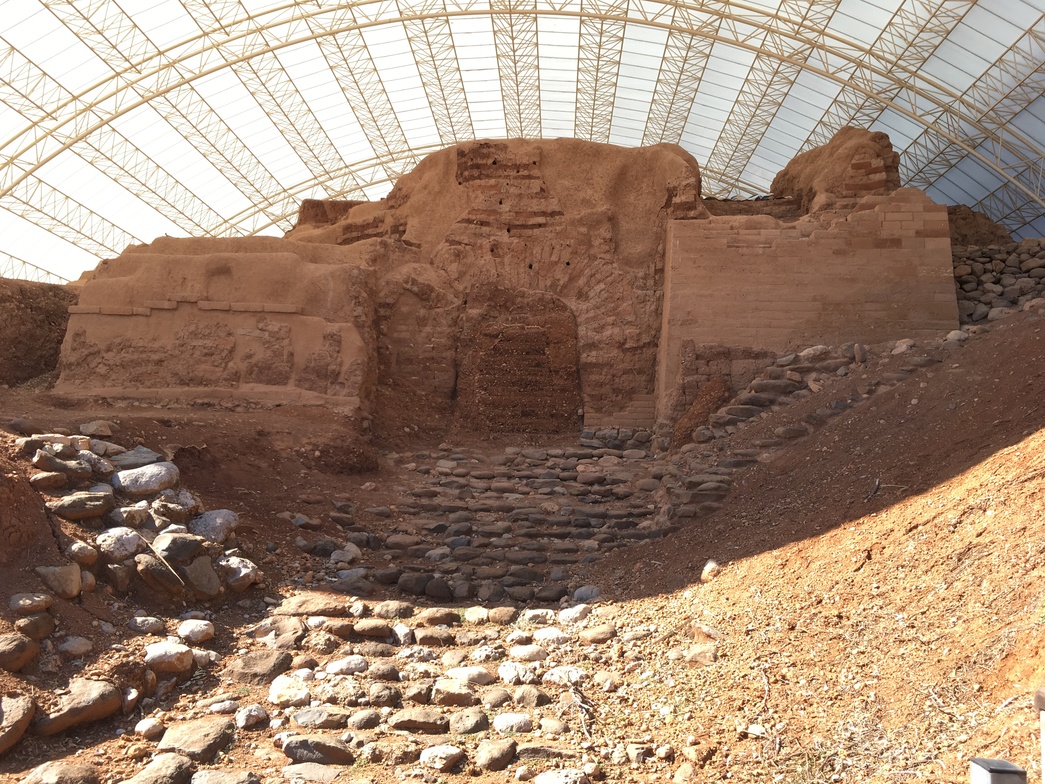 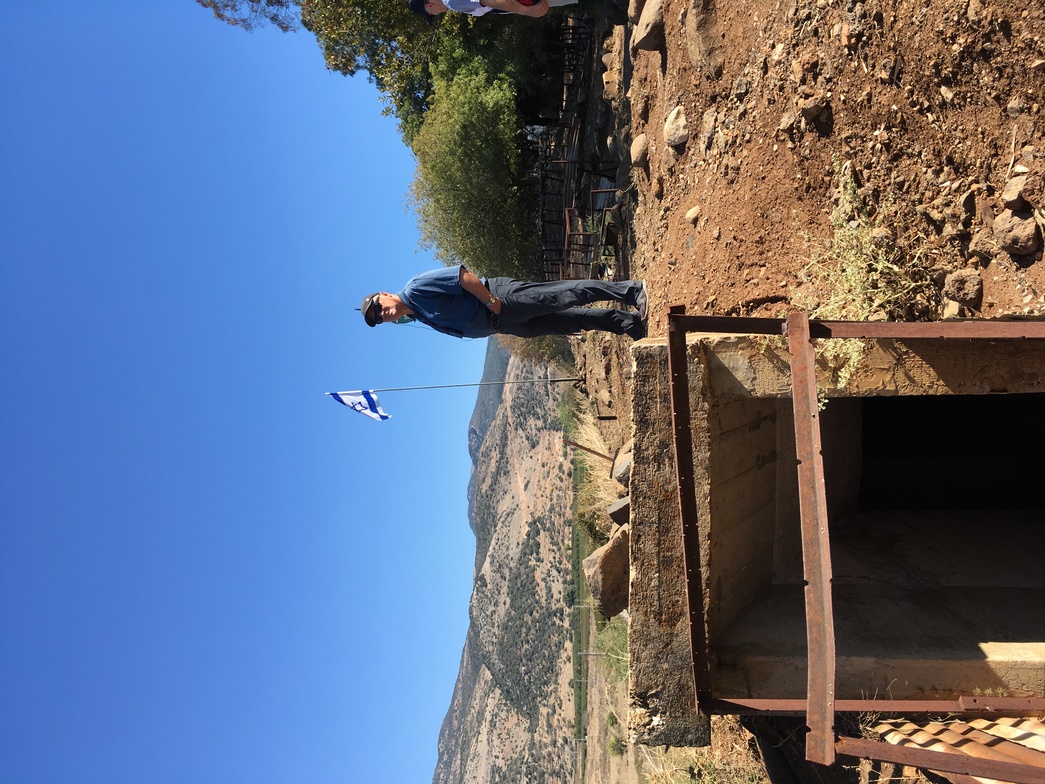 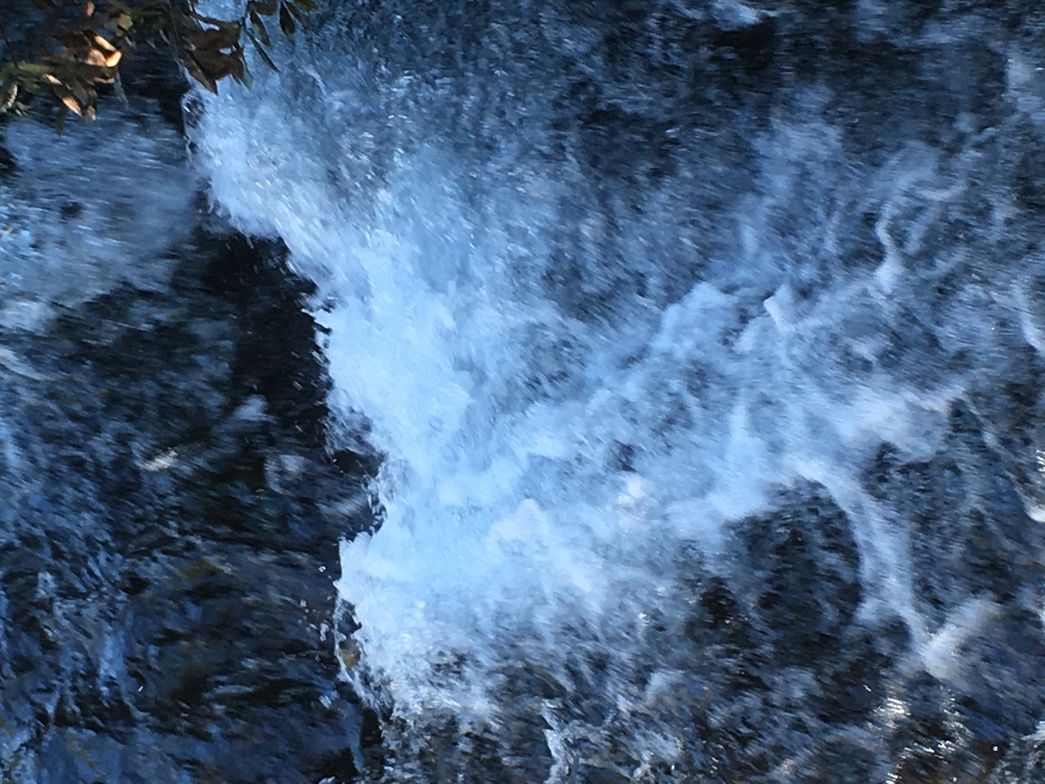 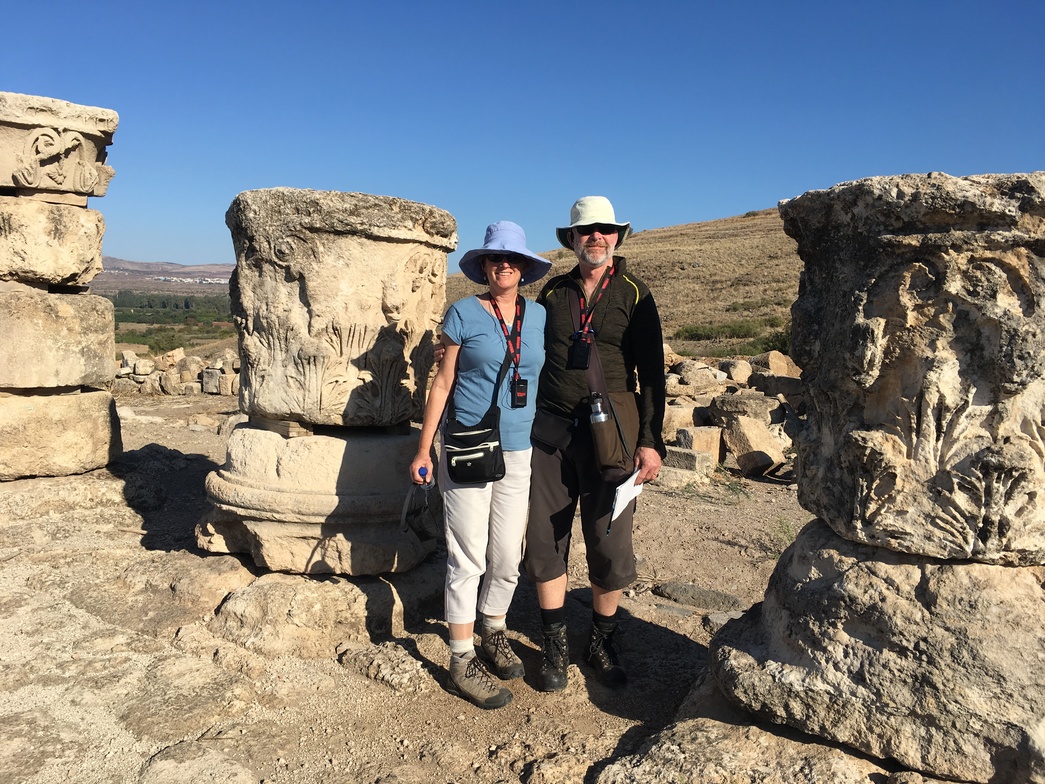 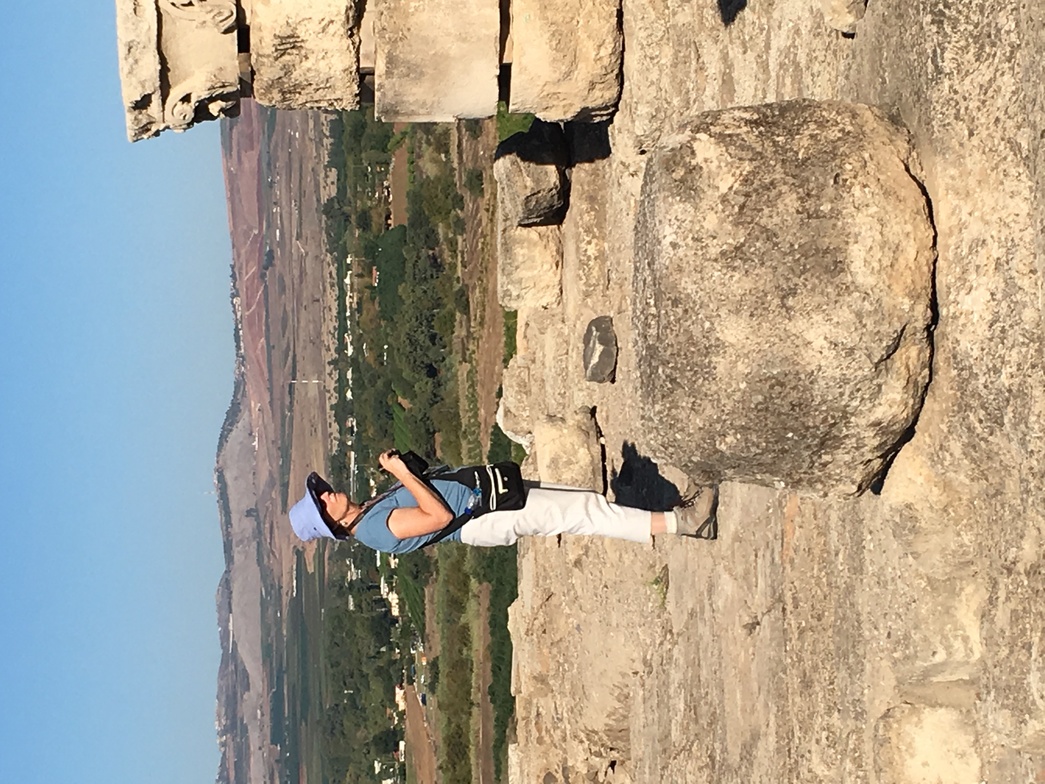 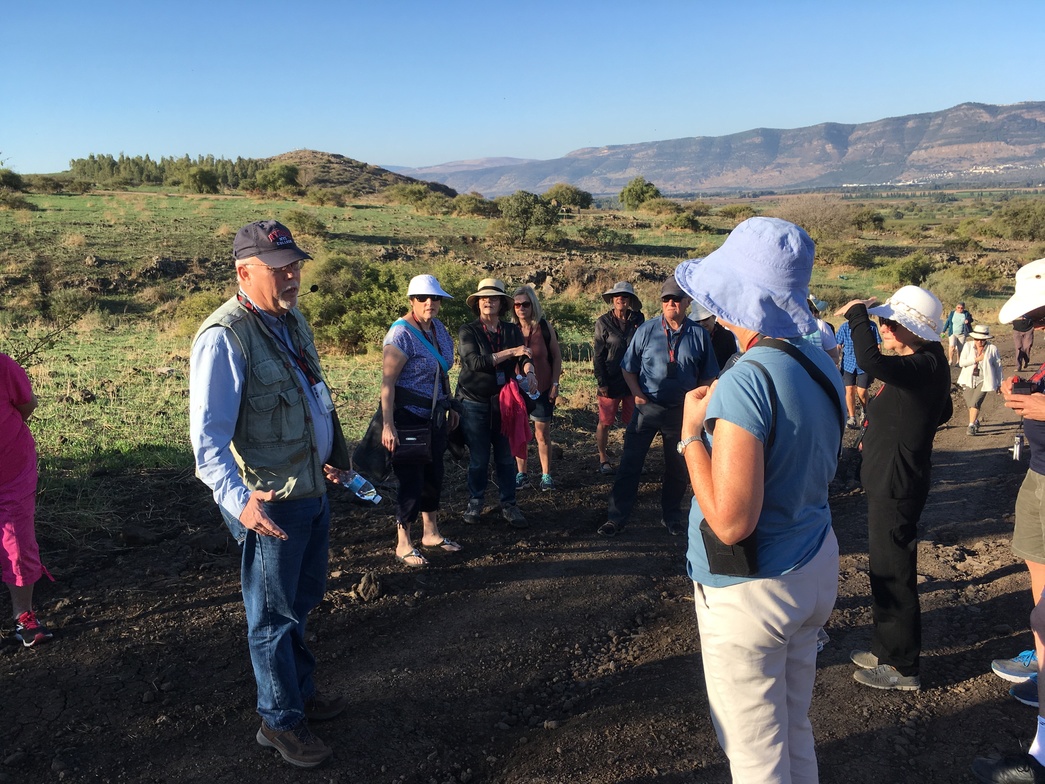 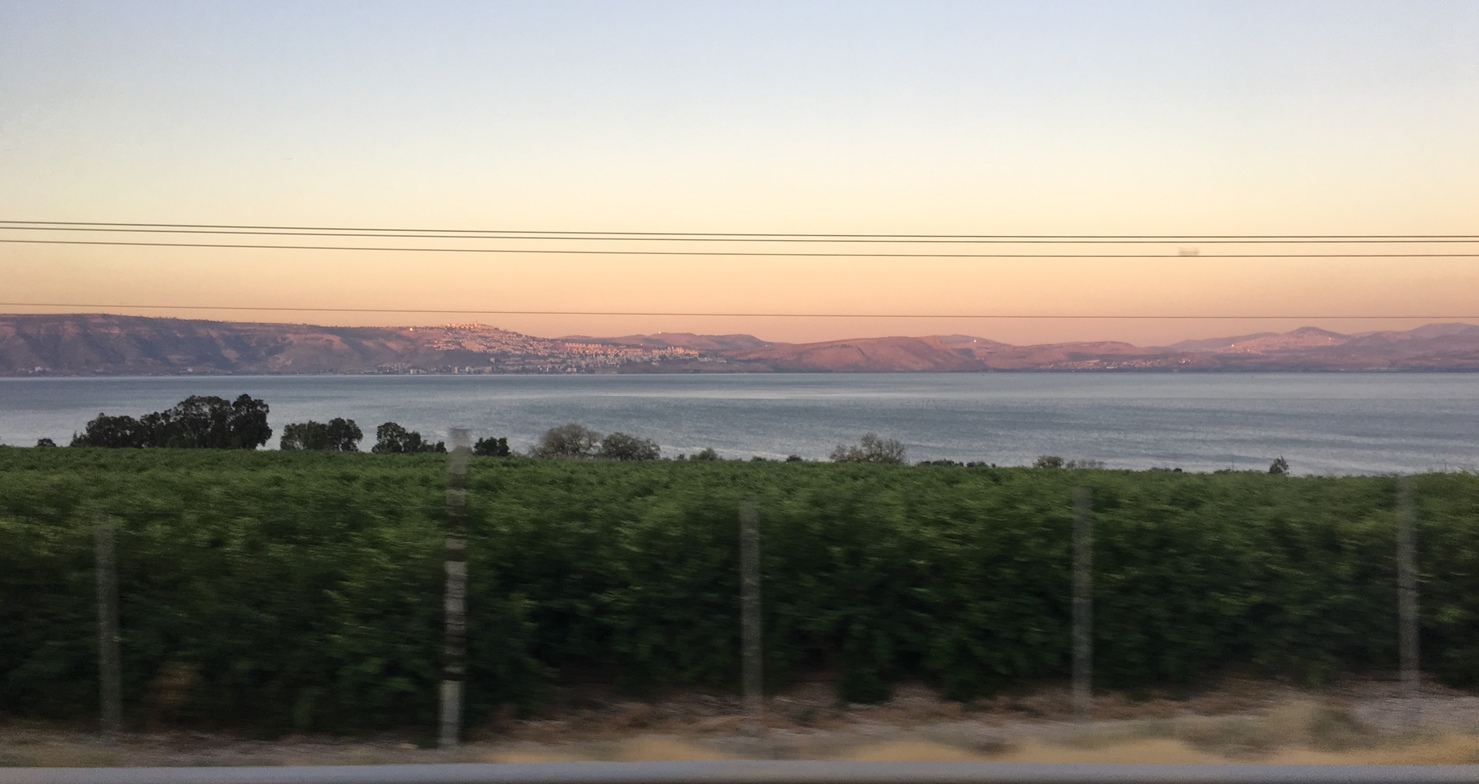 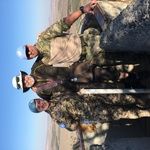 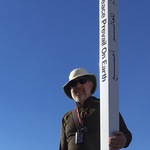 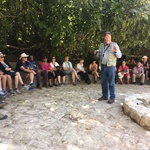 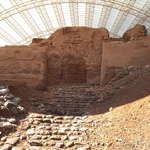 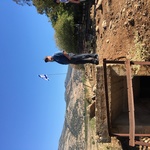 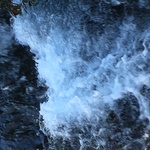 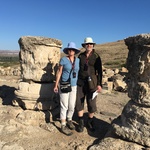 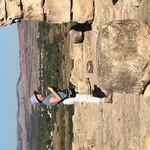 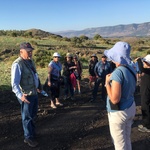 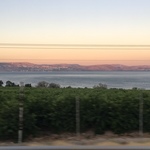 [The last part of the title should read, "Caserea Philippi, Umm El-Kanatir" - tried to change it but wouldn't accept.]

Please note* I have added photos and text to yesterday's (Friday's) post.  Please have a look!

Today we venture north of the Sea of Galilee to examine Old Testament, New Testament, Early Roman and Byzantine remains illustrating 1500 years of regional history. At Omrit (Roman era) we view a small Roman style temple thought to be built by Herod the Great and dedicated to Caesar Augustus.

At Dan (OT era), we explore the vital need to capture, fortify and hold strategic military centers in the north. This city was of vital importance to ancient Israel if it was to maintain the unity and security of its northern territories. It was at Dan that Jeroboam set up one of his Golden Calf worship centers (1 Kings 12:28-30). The ruins of Dan are located within a beautiful National Park where the spring of Dan issues forth volumes of fresh water that serve as one of the sources of the Jordan River.

At Caesarea Philippi (NT era), on the lower slopes of Mount Hermon, we consider the event of the Transfiguration (Matthew 17:1-9, Mark 9:2-8, Luke 9:28-36). It was from this region that Jesus set his face towards Jerusalem. The abundant water supply made the area very fertile and attractive for religious worship as evidenced by the remains of various Greek and Roman worship centers. It was also in this vicinity that Jesus asked Peter: “Who do people say that I am?” (Mark 8:27).

Our Byzantine era site is Umm el-Kanatir (“Mother of Arches”). Initially, the archaeological site was a large pile of stones left where they had fallen many, many years ago. The entire site was mapped with 3D laser scans, which provided precise locations and measurements for every block, and each block was tagged with a radio-frequency identification microchip for tracking. Using computer imaging and advanced software the stones were restored to their original location thereby rebuilding a portion of a beautiful 6th-8th century AD Jewish synagogue. Overnight Sea of Galilee, Ein Gev.

Pastor Paul’s reflections: Today we were immersed in the archaeology of the land.  There is almost as much digging by archaeologists as we saw construction in Jerusalem.  Each site is working on a problem.  Where is the original site of say, Caesarea Philippi, or of Bethsaida, important places in the Galilean ministry of Jesus and the disciples?  As you dig deeper, the further you go back in time.  You might think of it as ancient recycling of building materials.  You build your temple or synagogue with the materials from the previous site, using it as a foundation for the new work.  Over time the pile of materials gets larger.  The landscape has humps of land, or ‘tels’ which often signal that structures lie beneath.  It astounded me that we were viewing structures 4000 years old. Would Abraham have been at these sites?  What drives much of the archaeology is the desire to better understand the day in which they were built, and we spent a lot of time today reflecting on the Scriptures and the stories which are recorded having taken place where we were visiting.  There are shrines and temples to many gods, and the fact that many religions have this expression in the same place speaks of a ‘holiness’ of place that transcends religion.  There is a ‘persistent memory’ of a place over time.  We expanded upon this and spoke of the theology of a place, and with a focus on Judeo-Christian origins, the fact that The Galilee had theological expressions both in Judaism and Christianity that differed from Jerusalem.   Why as Jesus born in Bethlehem (Joseph’s family place) and raised in Nazareth, (Mary’s family place)?  Why was Jesus’ ministry base the Galilee and particularly Capernaum?  Did it have something to do with what God was doing in these areas before the birth of Christ?  Was the soil being prepared?  Clearly people did not accept the Gospel message nor did they accept Jesus “a prophet is not without honour except in his home town.”  But there seems to be evidence of the spirituality of the Galilee that was special.

I experienced a similar dynamic of place as I went on pilgrimage in Wales and in Northern England and Scotland, as Celtic Spirituality places a lot of importance on the spirituality of a place.  In our highly mobile world, this sensibility of place is largely lost.  How can we reclaim this as communities following after Jesus, being more sensitive to the spirituality in our place.

As we were visiting the site of Dan, formerly called Laish, there were two things that we reflected on. One was the abundance of water from the Springs of Dan.  This forms one of the tributaries of the Jordan River, and the aquifer from which it springs is part of a geological fault line that runs all the way to Lake Victoria on the African Continent.  God brought judgement on the people of Israel (Isaiah 8) and in verses 6 and 7 we read the following: “Because this people has rejected the gently flowing waters of Shiloah and rejoices over Rezin (alliance with Assyria) and the son of Remaliah, Therefore the Lord is about to bring against them the mighty floodwaters of the River [Euphrates] the King of Assyria with all his pomp… will overflow all its channels…”  The Bible uses these references as metaphors to communicate eternal truths.  Again, in John 7:36 Jesus uses the metaphor of the flowing stream (remembering how crucial water is in an arid land):  (at the height of the Feast of Tabernacles) Jesus says, “Whoever believes in me, as the Scripture has said, streams of living water will flow from within them.”